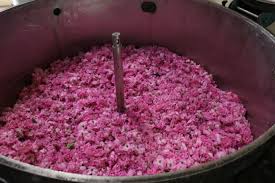 How to recognize floral fragrances ?

Regarding the happy families of the perfumery, the floral fragrances can pride herself not only to be the most numerous one, but also to be the first among its the fans. There are thousands of flowers. In perfumery, there are stamp marks such as the rose, the jasmine, the neroli, the mute flowers that do not give themselves up like the others, the white flowers and the imaginary ones. Thousand and one ways can be found to sublimate the flowers. In order to take one’s marks, I suggest to take you for an olfactive trip dotted with the “small stones” that will allow to learn more, recognized and understand the floral family which you will notice, is not only dedicated to women.

Birth place of the floral fragrances

It is most naturally that the theme of the flower or more the flowers is omnipresent, since the origin of the times in perfumery and still is even today. It is the image of the flower or of the bouquet that changes. It’s visual language first as well as its olfactive one has evolved.

Flowers grow in the whole world. That is why Jacques Cavalier, native of Grasse and in-house perfumer of Louis Vuitton considers that flowers are a resume of the world.

What are their characteristics ?

Small, tall… they have all shapes, different sizes and colours. “Just as colours in the pictural art, each flower has its own personality, which is unique and at the same time multiple because of the number of its various differences”admits Jacques Cavallier to me. Moreover not all of them have just only the odor of a flower. As a matter of fact, the carnation has a spicy facets, reminding the clove. In order to find one’s bearings and draw a view on these flowers that are used in perfumery, I suggest to present you with a classification.

What is the DNA of this family ?

It is the flower or the the flowers which are part of the heart of this family. They have always incarnated feminity along with the perfumers who have been the most faithfull interprets. It all started with the exposure of a soliflore and the main actresses being the rose, jasmin, orange flower and then lily of the valley and the violet. It is important to point out that the improvements of the extractions techniques as well as the discovery of the synthetic notes will be decisive to the evolution of the formulaes of the floral perfume. Most naturally, the floral bouquets will bring a new richness, embellisted by either a green, spicy, fruity, aldehydic or woody facet.

At the mercy of the tendancies, the flowers will become realistic, symbolic, abstract or even imaginary. It is the suggested emotion of the naturalness that will make floral perfume move. So their language will be transformed even up to the degree to let the flowers with odor appear such as the poppy.

I am the most appreciated olfactive family

So easy to understand my language is universal and accepted by everybody. The flower is the poet’s and the perfumer’s muse. It is the symbol of feminity and has been ever since the origin of times, present in perfume but also in art. The floral perfume respresents a close garden, a secret, intimate, exhuberant place full of colours and smells.

What are the leaders of the floral fragrances ?

Most attentive and a believer in the Symrise Genealogy, the creative company, I introduce you with the archetype perfumes (they are perfume with an olfactive structure so to bring a true olfactive innovation) of this family just as well as with the feminine fragrances and masculine ones.

So Symrise along with The Perfumers French Society have their first olfactive classification. The richness of the flowers facets allows the perfumer to play a part with lots of facets. Twelve different facets appear in the feminine fragrances.

How are the floral fragrances used ?

Floral fragrances  can be worn at all hours of the day, in all circumstances. The perfumers, just like olfactive painters know how to give colours, tones, all the possible and imaginable textures to flowers. The flower is married  pratically to everybody of the world of perfume plants ! So, floral perfumes reflect all the emotions and express all the sensations. They are perfume that we wear night and day. They can start with a dynamic and fresh flower onto a feminine bouquet and end onto sweet flower tucked in an amber and wood bed.

I am sure you have understood that flowers are not so naive, because under their skirt of petals, one could be suprised by what to find ! Such as delicate and light sensations like a silk stocking or a captivating one like black lace.

Introduction to the stars

We owe to François Coty, the first modern solifloral perfume, with Rose Jacqueminot. With this fragrance, Coty recalls the smell exhaling from the rose fields in Grasse with which he, most certainly, intoxicated himself during the days in May and express all the delicate, feminine charm of this newly born XX century. There are lots of stars at the heart of the floral family. I let look at the above mentioned leaders of the floral family. What is the future for this family

The flower and its bouquet will always be successful. It is the formulae that evolves and will always and constantly evolves. The art of the floral bouquet lies in multi-sensorial compositions. Today, by spliting the flower and thoroughly study all its molecules in order to keep only the interesting ones, the perfumer will be led onto other tracks. This how the perfumer will recreate, thanks to “impressionist petals” and imaginary flower that nature would not deny ! So, in order that a flower expresses a new horizon of sensations, one needs of course to study the formulae so that a flower leads to create another one. By finding the right note that overlaps